What Will You Do About the Itch? 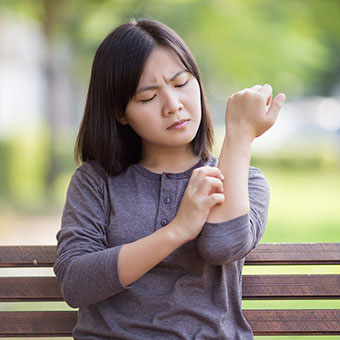 It had been several days since the small, red rashes had appeared on my ankles. Yet my vigorous attempts at treatment seemed to produce no results.  My cat had recently had ringworm (which also shows up as a red rash) so I assumed this must simply be me getting ringworm from him again. Accordingly, I treated this with an anti-fungal cream.  Not only did the rashes not go away, they got significantly worse, spreading up the side of my leg and I even got a rash on my chest as well.  The other odd thing was that unlike the previous ringworm rashes I had gotten, this rash itched – intensely.

Once the itching got so bad that I was no longer able to sleep, I finally had the bright idea that this may in fact not be ringworm but something else.  A quick google search later and a new potential culprit emerged: poison ivy.  When I mentally played through the events of the week to see when I might have been exposed to it, I found pay dirt: several days earlier, I had gone into the woods to retrieve a ball that got hit over the fence during a tennis match.  With my ankles completely exposed during said woodland venture, I had come in contact with leafy, green, evil.

To say that poison ivy is very itchy for me is about as large an understatement as saying that being thrown from a motorcycle while going at seventy miles an hour would produce some mild road rash.  The itchiness was utterly extreme.  I found myself unable to sleep, struggling to focus at work, and virtually incapacitated from even having a conversation with someone.

During this period, I had a lot time to think about itching (since it was constantly present, like an in-law who has come to visit and refuses to leave).  As I pondered upon it, I came to realize that itching is a totally counterproductive response by the body to the stimulus that causes it.  This is because scratching only serves to make the situation worse, not better.  The rashes were effectively screaming SCRATCH ME!!  While scratching might provide a brief moment of relief, by doing so, I would only spread the oil from the plant onto new places on my body thus further increasing the amount of itching I would endure.  Not to mention, scratching does nothing to treat the underlying condition that caused the itching.  Accordingly, as counter intuitive as it might seem, the healthy response to itching is not to scratch it, but rather, to treat it.  By treating the itch, the condition that caused it could be addressed so that the itching would go away altogether.

As I thought further about this phenomenon, I realized how strikingly similar this is to the various temptations towards other unhealthy behaviors we experience.

Maybe the thing you find yourself tempted towards is anxiety.  Whenever something difficult or uncertain comes up you find the thoughts screaming in your head: WORRY ABOUT THIS!  FEAR THIS!  BE ANXIOUS ABOUT THIS!  Yet if you scratch the itch of anxiety, it does nothing to address the underlying condition and instead makes it worse as thoughts tend to spiral downward into darker and darker places.  Then, two hours later you find you’ve accomplished nothing productive whatsoever and only find yourself in a state of emotional turmoil.   Instead, what if you tried to treat the anxiety instead of scratch it? Some questions around that might be: Why are my responses towards anxiety so intense around certain situations?  Are these fears perhaps related to painful events from my past that I have not dealt with yet in a healthy way?  Are my fears or anxieties irrational?  If so, why do I have them?  If they are rational, what good is focusing on them producing?  What is the difference between having a healthy degree of concern verses an unhealthy degree of worry?

Maybe the thing you find yourself tempted towards is anger.  You find you get angry very easily or you find that certain situations trigger an almost irrational anger out of you that you can’t seem to control.  As soon as the stimulus appears you find your blood starting to boil, the thoughts screaming in your head: YOU HAVE A RIGHT TO BE ANGRY ABOUT THIS!  GIVE THEM A PIECE OF YOUR MIND! THEY DESERVE THIS!  Yet if you scratch the itch of anger, it does nothing to address the underlying condition and instead makes it worse by often causing great harm to others and words or deeds you end up feeling tremendous regret over.  Instead, what if you tried to treat the anger instead of scratch it?  Some questions around that might be: Why does that exact phrase or this exact situation trigger such an intense response from me?  Are there people in my past that I am still angry at that this person’s words or actions remind me of?  Is my anger due to unrealistic expectations on my part?  If my expectations are realistic, what good has my anger accomplished?  Has it made it easier or harder for the person to hear me?

Maybe the thing you find yourself tempted towards is chemical pleasure in your brain.  This could have a myriad of possibilities from eating junk food, to drinking alcohol, to illicit drugs, to sexual pleasure.  Perhaps you’ve never thought of it that way, but all of these produce the same thing; that “Mmmm…” you experience when biting into that cookie, that tipsy feeling after having a couple drinks, the high from illicit drugs, the massive rush at the climax of sex – all of these are chemical pleasure in the brain.  So once a stressful stimulus presents itself you find the thoughts screaming in your head: GO EAT SOMETHING!  GO HAVE A DRINK!  GO GET HIGH!  GO HAVE SEX!  Yet if you scratch that itch, it does nothing to address the underlying condition or situation but instead makes it worse by leaving you guilty and ashamed of your actions – perhaps actions that you have vowed over and over again to stop doing but can’t seem to pull away from.  Instead, what if you tried to treat the pull towards chemical pleasure instead of scratching it?  Some questions around that might be: What are the feelings that trigger you to seek chemical pleasure?  Boredom? Loneliness?  Regret?  Feeling inadequate – perhaps as a parent, as a spouse, or in your job?  Are you trying to numb or medicate some painful experience?  If so, what is it?  What good has ever come of seeking chemical pleasure like this?  What does it look like to use the above things in healthy ways?

Something else I’ve realized in this process is that systemic itches (like bug bites, poison ivy, worry, anger, drinking problems, etc) have never gone away by scratching them.  Yet, whenever we encounter these itches, we all tend to go on a scratching marathon.  Perhaps it’s time to disbelieve in the efficacy of scratching.  Perhaps it’s time to pursue treatment instead.  For me, that meant going to the urgent care and getting steroids to treat the underlying condition of my immune system’s intense overreaction to poison ivy.  What does treatment look like for you?

5 responses to “What Will You Do About the Itch?”